Saturday 27th March was the first official match for the Campbelltown City SC Collegiate team!
Playing a qualifying Cup round against fellow new team Hahndorf SC, the match was played at Hahndorf Soccer Club in idyllic surroundings.
With the match getting underway, Campbelltown quickly got into their rhythm with an early goal after only 3 minutes.
Campbelltown controlled most of the play and although both teams hit the upright, the score was 2 nil for the Away team at half time, with goals to Jackson Cleaver and Reuben Houlihan.
The play in the second half continued to be controlled by the Away team and the scoring continued by Campbelltown.
The final score was 7 nil with Reuben scoring a brace, Julian Spadavecchia, Oscar Knight, Nicholas Mercorella and Peter Romeo adding goals in the second half.
An all-round great team performance to ensure qualification for the Cup round proper.
Our Collegiate Cup Round 1 opponent is our rival Rostrevor Old Collegians. The date for this cup tie is Wednesday 21st April, kick off at 8.15pm at home on Pitch 2. This is a great opportunity for Campbelltown supporters and juniors to cheer us on.
The B team finalised their pre-season campaign on Saturday 27th March with an away game trial against Division 2 Adelaide Cobras.
Although Campbelltown took an early lead in the match, the Cobras took control after this with the half time score 3-1 to the home team. The second half was much the same and the final score was Cobras 7 to Campbelltown 3. Although this was not the result we wanted, it showed we have plenty to work on prior to the season proper.
The Collegiate Soccer League season commences at home against CBC, with the A team playing on Friday 9th April 6pm on the main Pitch as a curtain raiser to the Senior NPL team and the B team on Saturday 10th April 3pm also at home on the main pitch.
We would love to see as many supporters as possible.
Full Collegiate fixtures will be communicated through the club shortly. 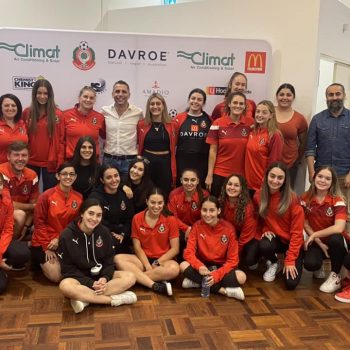